Last April, I decided to splurge a bit and a purchase a box of Doctor Who cards from Blowout Cards. To be fair, there was some sort of sale going on and the box was half-priced. (It's still available and on sale if you're interested.)

The box guarantees the full 88-card base set and two autographs. This is no ordinary box, however, as these are Widevision cards that measure 4 7/8 by 2 3/4 inches--they're big cards. The production was limited to just 1,500 boxes, and the box itself is pretty snazzy. 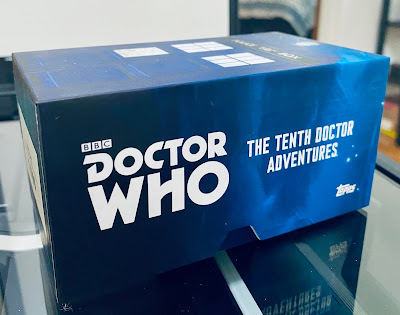 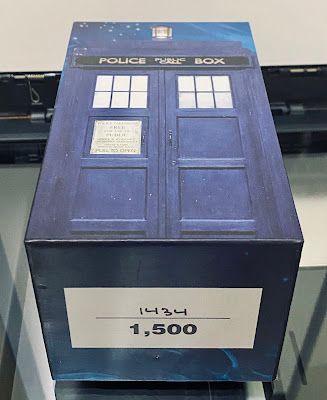 The 88-card set depicts David Tennant's run as the 10th Doctor over three series (2005-2010).  Each episode gets two cards, with the exception of Tennat's last four episodes which were considered specials--they each received a single card.

David Tennant is my favorite actor, and I was hoping to pull one his autographs but I wasn't that lucky. 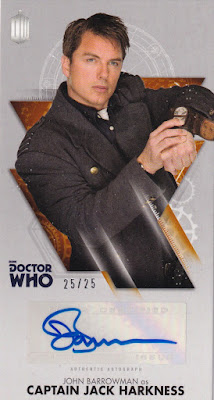 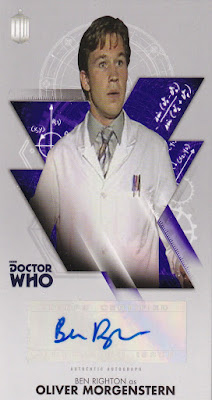 I still did had some decent luck, pulling what I considered the fourth best auto from a list of 38 signers (David Tennant, Billie Piper, and Alex Kingston would have been just ahead of John Barrowman as Captain Jack Harkness, though it's neck and neck.) The Captain Jack auto is considered a Bronze parallel (#/25). Base, Blue (#/50), Silver (#/10), and Gold (1/1) parallels are the other versions.

I also pulled the very pixelated Oliver Moregenstern you see above. I'm not sure how apparent it is from the scan, but it's one of the most pixelated images I've seen on a card. I didn't initially recall who Oliver Morgenstern was and later looked it up to find out he played a medical student in the Series 3 premier, Smith and Jones. He later briefly appears in the Series 4 episode Turn Left, an alternate universe episode where we discover Martha Jones gave him the last oxygen to save him after the Royal Hope Hospital was transported to the moon by the Judoon. He's a minor character in both episodes, so this is certainly a "filler" autograph in the set. Still, I'm happy to have the card in my collection. 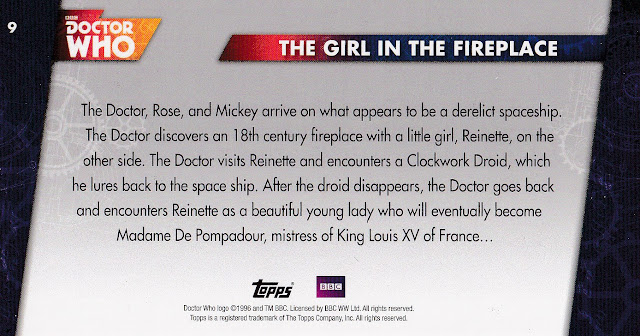 Before I reveal the set in its entirety, I thought I should also show what the backs of the cards look like. It's fairly simplistic. The name of the episode appears in the bar near the top of the card, and it's followed by a short plot summary of the episode. Becuase each episode gets two cards, the summary is split between both cards. You'll notice the summary on this cards ends with an ellipsis; the summary on the next card then begins with an ellipsis and completes the summary. The episode depicted above might be my favorite episode of the series, and it certainly contains one of my favorite lines.

Without further ado, here's the complete base set for your viewing pleasure. Five years of fantastic television condensed into 88 slices of cardboard. 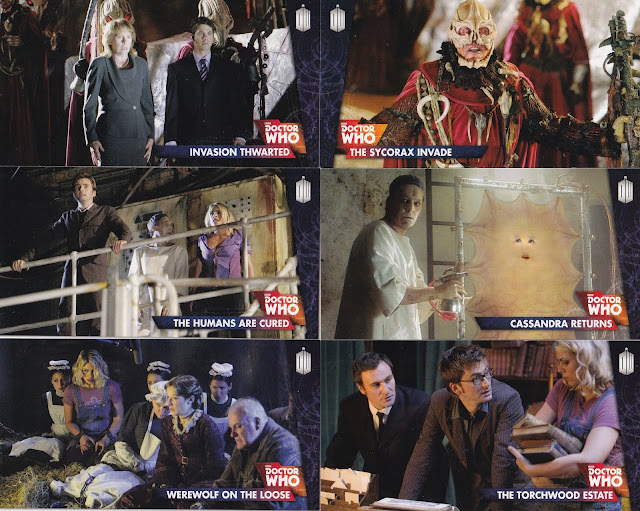 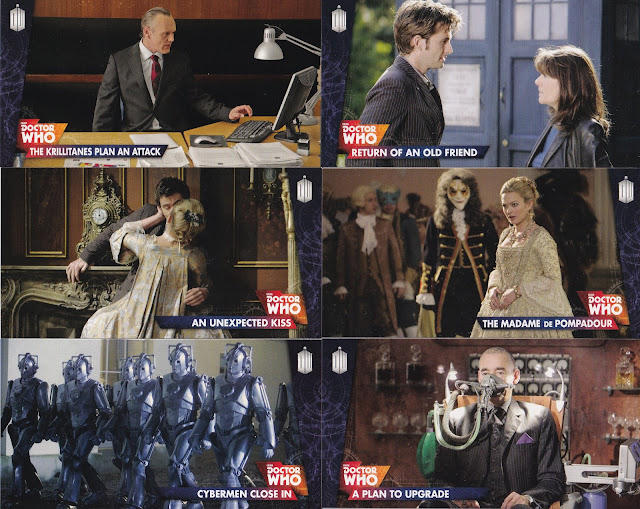 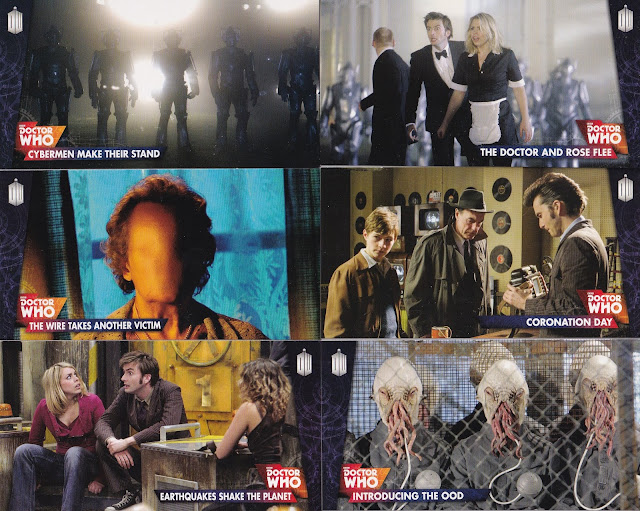 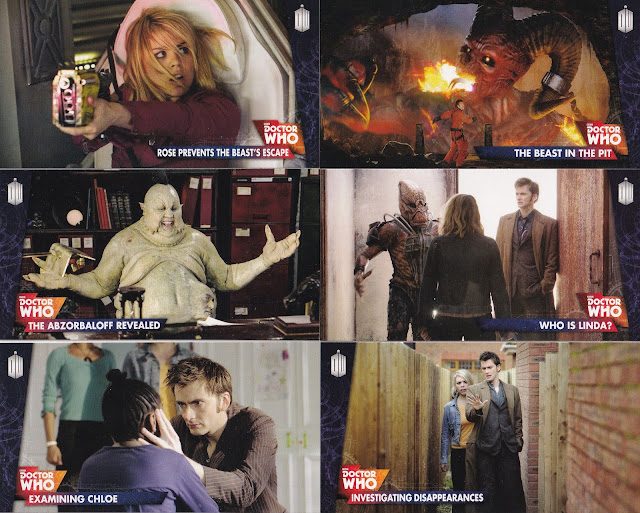 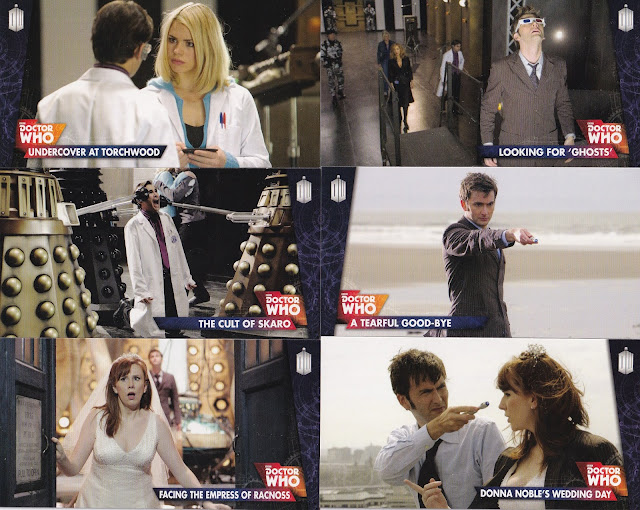 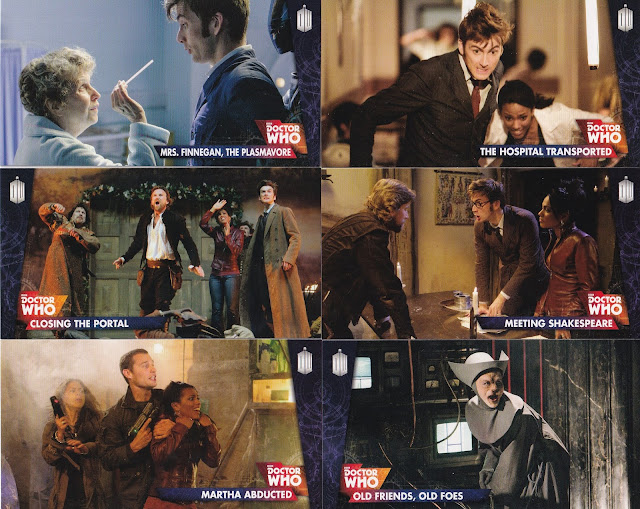 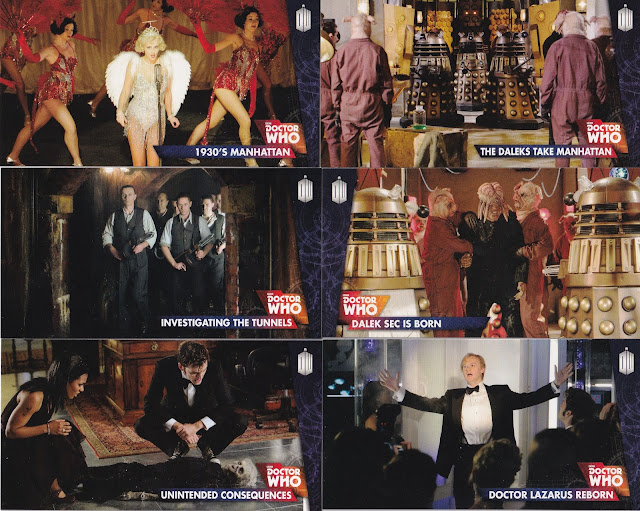 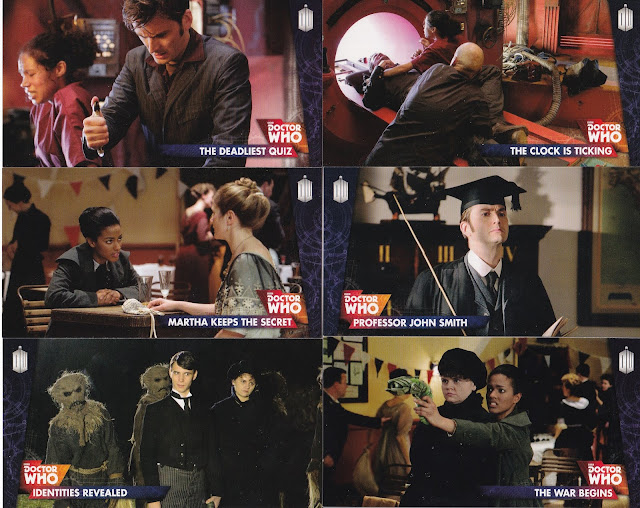 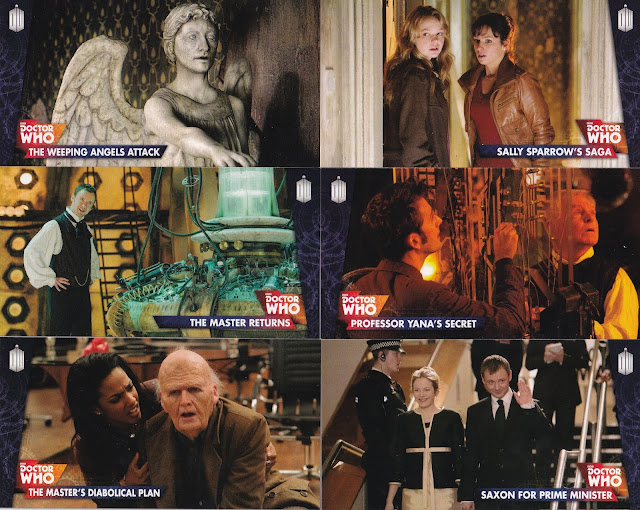 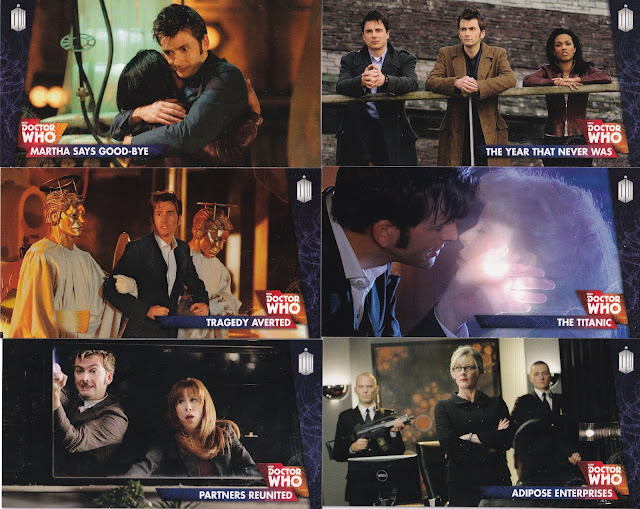 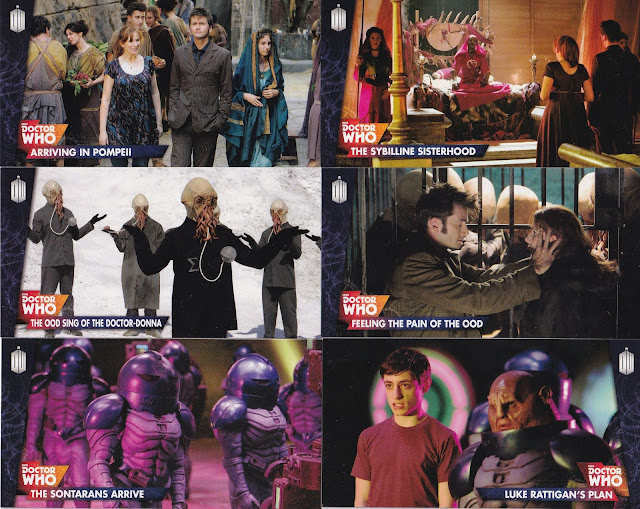 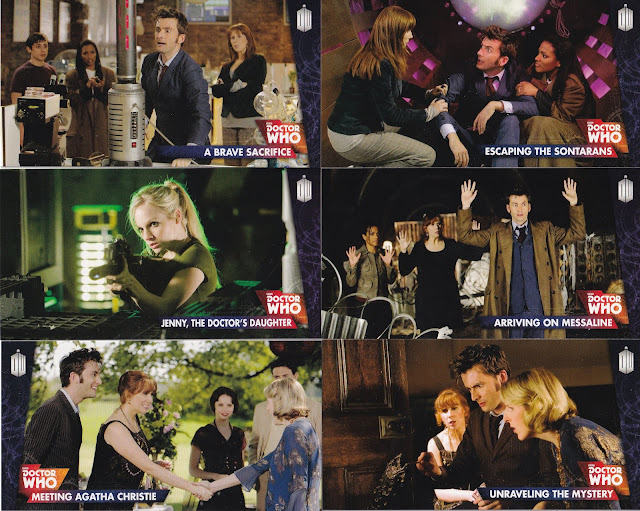 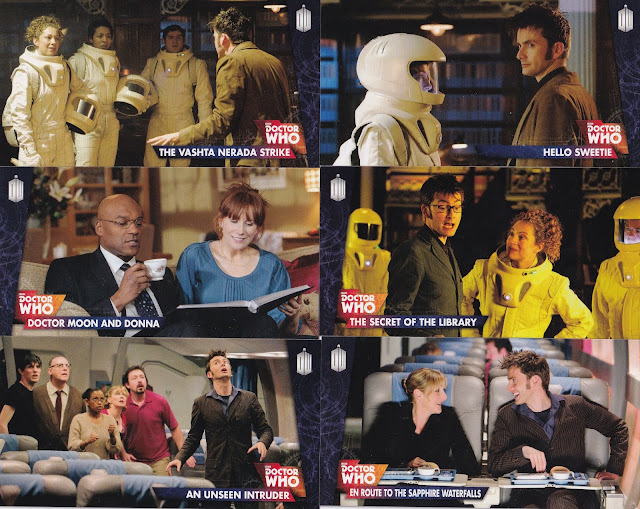 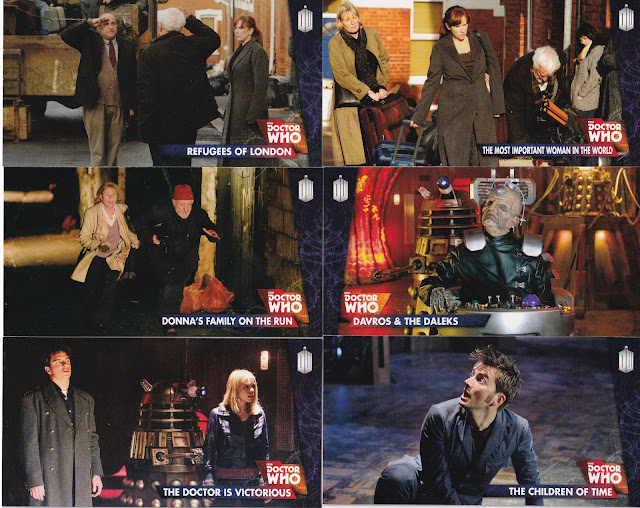 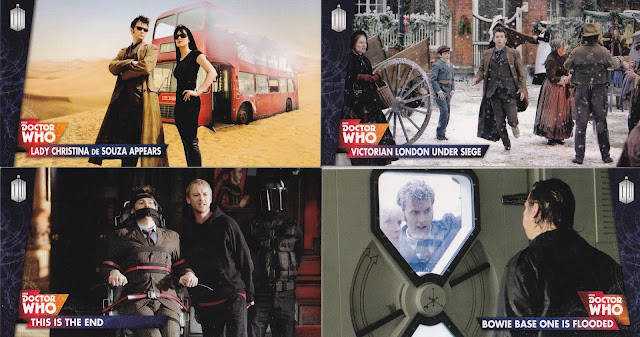 Wanna trade? Find me on Twitter @ChavezRavining or email me at alexmarkle05 @ gmail dot com