Allen and Ginter is one of my favorite releases of the year. It often takes a lot of slack for the inclusion of non-sports-related cards, but I find that quite fun. There aren't any other sets that combine baseball, canines, trains, flowers, horses, and lost languages. And that's just the 2019 release alone. I doubt those reading a baseball card blog (or running their own) are one-hobby types of folks--I'm certain our interests stretch far and wide beyond baseball--so seeing subsets of things like The History of Flight, subjects that likely don't get any representation anywhere else on cardboard, has the potential to be quite fun.

Of course, baseball is still the primary draw for me. The design and photography in this year's set is the sharpest it's been in years. I feel Topps got out of its own way this year and opted for a minimul design, similar to the 2010 set. The "framed" sets of the last few years tended to feel closed off and the cards blended too closely together, creating a sort of indistinguisable set of cards. Each of these cards from 2019, however, seems to have its own personality, with the design tying the cards together. 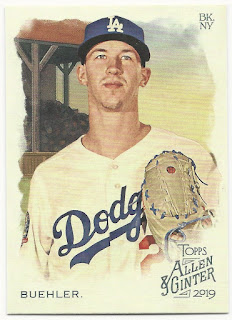 That said, I'm intrigued by the the background imagery used in the Piazza, Pollock, and Buehler cards above. It seems to be of an old-timey, fictional stadium (a pretty cool touch), though considering the backdrop in all three cards is nearly identical, I wonder if it was used too much throughout the set. Regardless, I'm happy to add a new Buehler to the PC. 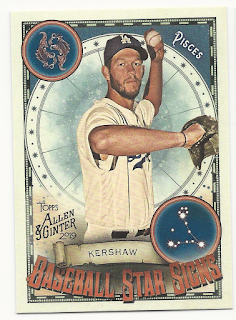 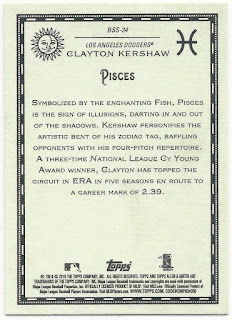 Along with those Dodgers base cards above, I also managed to land a pretty cool Kershaw insert. This cancer isn't into astrology, zodiacs, or star signs, but it's still a pretty cool lense from which to approach a card set. I mean, where else would you find a comparsion likening Kershaw to an "enchanting fish"? 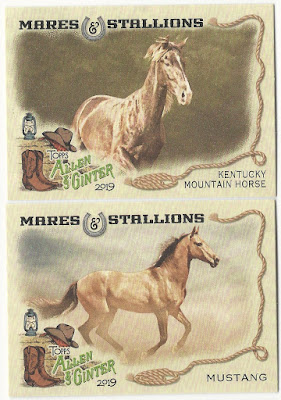 I ended up purchasing three hanging value packs, another cheaper value pack, and a single pack, and I managed to pull the relic below, but it was the two cards from the 15-card Mares and Stallions subset that I was most excited about. As I described in this post several months ago, I decided to start a mini-collection of horse cards. That post featured two minis from the Horse in the Race miniset from 2017 A&G, and until I pulled the two cards above, they were the only cards in that mini-collection. Not a bad day when a couple of packs doubles your PC.

I'm hunting the cards from this Mares and Stallions set, so please let me know if you have any dupes. You can find my want list here. I'd love to take them off your hands. 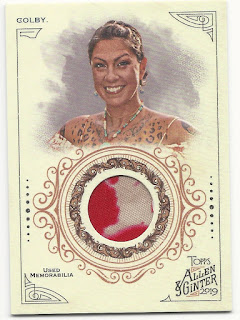 Finally, here is that relic I alluded to above. I don't watch a ton of television, and I certainly never watch American Pickers, so this card didn't do much for me. Still, it's never a bad thing to pull a relic. It's another card to add to the trade bait, for those interested.

Overall, A&G has definitely been one of my favorite products of the year (as it always is). I got a nice start on that Mares and Stallions set, though I'll still have to chase that elusive Jeopardy James autograph....
Posted by Alex Markle at 5:54 PM